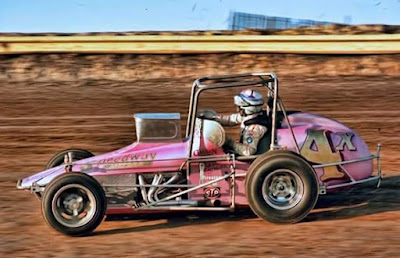 Lincoln, Neb. (August 6, 1974) - It was Jan Opperman night at Midwest Speedway Tuesday night as the Beaver Crossing driver proved himself clearly the best of the field assembled for the Midwest Speedway Sprint Car championships.

Opperman placed fourth in the time trials and then, in methodical fashion, won the trophy dash, his heat and the main event, lapping every car but three in the 50-lap feature.

For Opperman, the win, worth in excess of $1,000, came despite a cold the Beaver Crossing driver came down with at Long Pond, Penn., Sunday where he placed eighth in the NASCAR Purolator 500 at Pocono Raceway.

“I woke up this morning with a temperature and the flu. I am really tired now, but there was no chance I'd have missed the races tonight,” said Opperman.

Opperman, who started in the second row in the main event, took the lead from Rick Ferkel of Bowling Green, Ohio, on the eighth lap. Before Ferkel had moved in front when early leader Roger Larson, subbing for injured Ray Lee Goodwin, had a flat tire.

“Coming out of the first turn someone's radiator hose had come off, pouring a bunch of water on the track,” Opperman said. “It took both of us up high, but my tires had a better bite, and I was able to pass him.”

After that it was clear sailing for Opperman as he skillfully weaved in, out and around lapped cars en route to the win.

“That’s (lapped cars) the biggest worry. But that’s one of the best things in running in a higher caliber show such as these championships. The racing’s a lot cleaner. These guys are all winners, and they know what it's like trying to get around a slower car, so they didn’t give me any trouble at all,” said Opperman.

Opperman also felt that even without the opportunity to pass Ferkel that he got, he would still have won.
“I was a little quicker. I didn’t want to make a strong bid at first. I wanted to get my car dialed up first,” said Opperman, adding, “If he had been as fast as me, he would have been all over me the rest of the race.”

“But you never know, I might not have won. He's (Ferkel) a game and tough driver.”

Once in the lead, Opperman said the most important thing was to “set a steady pace”. You don't want to put any extra strain on the car and especially the right rear tire.

“My tire is a little softer and in a 50-lap race like this it can get hot and go bad awful quick. In fact, later on in the race I moved up a little higher on the track There hadn’t been as many cars driving there and the track was a little cooler on the tire. Then after I got up there, I found I could go faster anyway,” Opperman said.

Opperman said, that as usual, “You have to chase the car all night” to allow for changing track conditions. He pointed out that he had used three different front tires and added that in the main event his motor overheated.”

“Actually, that was good,” Opperman said. “On a slick track like this, it makes the car go faster.”

Opperman noted that the track was “in excellent condition. For a short track they really keep this in good shape out here. Plus having the shade all day, the clouds, helped.”