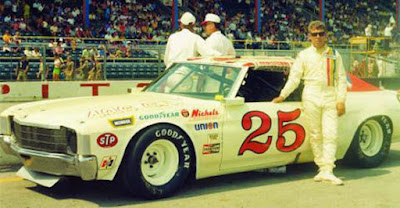 West Allis, Wis. (August 17, 1972) - A late pit stop by Bobby Unser gave Gordon Johncock the lead with only eight laps to go and he held on to it to win the 150-mile late model stock car race on the State Fair Park Speedway on Thursday.

Johncock, Franklin, Ind., driving a 1972 Chevelle, had not been in the lead since the start but suddenly found himself in front of the pack when Unser made the unexpected stop on the 143rd lap in his 1970 Plymouth Superbird.

Unser was forced into the pits because of a flat right rear tire, apparently the result of something he ran over on the track.

Johncock went on to beat Unser by less than a lap on the one-mile paved oval. His average speed was 96.442 miles per hour and the victory was worth 300 points in the United States Auto Club stock car division standings and $3,809 in prize money.

Jack Bowsher of Springfield, Ohio, finished third in a 1971 Ford Torino. Fourth was Butch Hartman of South Zanesville, Ohio, in a 1972 Dodge Charger and fifth place went to Dave Marcis of Skyland, S.C., in a 1972 AMC Matador.

Unser started on the pole and led until the 73rd lap when he pulled into the pits seven seconds ahead of Bowsher. Bowsher beat him out of the pits and took over the lead until lap 92 when Unser regained the top spot.

Marcis formerly lived in West Salem and Wausau and regularly drives on the NASCAR circuit. He drove in the USAC race Thursday as a replacement for Gary Bettenhausen who was injured in a race last weekend.