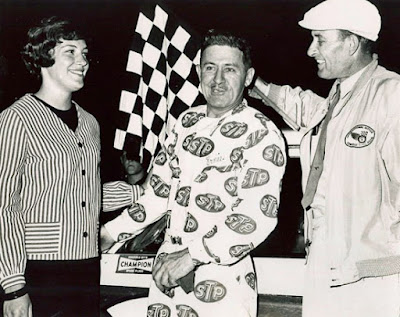 Des Moines, Iowa (August 29, 1965) – Ernie Derr of Keokuk made it three in a row by winning a rain-abbreviated late model stock car feature at the Iowa State Fair on Sunday night.

A crowd of 7,000 sat patiently through the rain and early fireworks display before a downpour ended the scheduled 250-lapper on the 109th circuit.

Showers washed out the afternoon stock car program, but officials were able to get the track ironed out for the night’s feature.

Derr was about a lap ahead of Bob Jusola of Mound, Minn., when rain started to fall on lap 96. That brought out the yellow flag and they ran until the track was too muddy for further racing.

Ramo Stott of Keokuk, trying for his 11th triumph off the season, broke a left front spindle while running second behind the eventual winner on lap 39. Stott did not get back on the track until 16 laps later but still managed to finish 13th, regaining one of his lost laps before the rain began to fall.

Derr, who earned $1,000, was never challenged in the race. The 42-year-old Keokuk driver had a 25-yard lead on Stott until Ramo had to pit for repairs.

If the fans thought they were seeing things, they were right. Ray Littrell of Kansas City, a taxi driver, had his Chrysler-powered Yellow Cab out there running for 75 laps. He collected $50 on his meter for 16th place.