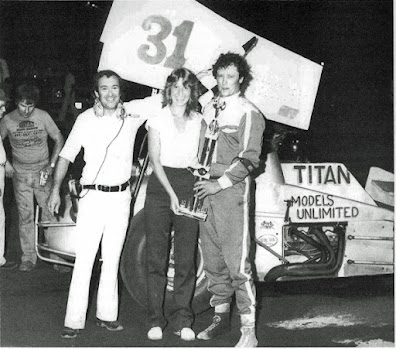 Sedalia, Mo. (August 30, 1981) – “I raced here today to earn the points to keep the NSCA championship,” said a happy John Stevenson of St. Paul, Minn., after he won the 35-mile sprint car feature Sunday at the Missouri State Fairgrounds.

Stevenson, who was out front for every lap but the first two, found the one-mile track to his liking. “I ran real hard for the first five laps after the green then I tried to smooth it out to save the car for the last 30.”

By lap 8 Stevenson had built a straight-away lead over second place Bobby Layne of Kansas City. Stevenson saw his big lead disappear on lap 15 when the yellow came out for Dick Howard of Kansas City.

On the restart, Stevenson once again pulled away from the pack. On lap 20 Tim Green of Carmichael, Calif., pulled in behind Layne for third place. Layne’s car began smoking on lap 22 and he broke on lap 26. By now Green was running second and Gary Scott of Holts Summit, Mo., move into third.

The red flag came out on lap 27 when Jerry Walkingstick of Bartlesville, Okla., rode the outside wall in turn three.

The restart saw Stevenson build a comfortable lead over both Green and Scott. Stevenson would build on his lead to more than a straight-away lead at the checkered flag.

As Stevenson pulled into victory lane a bolt fell out of his right rear suspension causing the right rear to slump to the ground.

Mike Brooks of Knoxville Iowa, set fast time in time trials with a time of 35.859 seconds on the dirt mile. Twelve-lap heats went to Rick Weld of Kansas City, Stevenson, and Brooks while the 4-lap trophy dash was won by Weld.