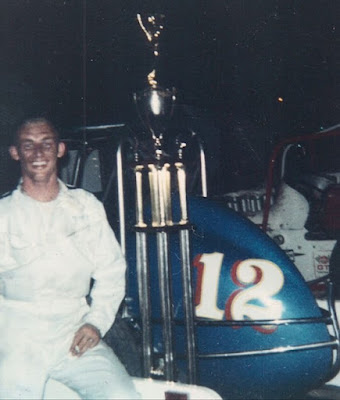 Kenny Gritz proudly poses next to his trophy after winning the Super Modified National Championship at the Marion County Fairgrounds.

Knoxville, Iowa (August 16, 1969) – Kenny Gritz of Lincoln, Neb., fought off the pains of first degree burns about the face and won the Super Modified National Championship feature at the Marion County Fairgrounds on Saturday night.

Burned earlier in the day when spark from a welding torch ignited gas tank fumes, Gritz overtook fellow Lincolnite Jan Opperman on the 27th lap and took home the checkers with a comfortable lead.

Starting on the third row, the gutty 25-year-old stayed tight and watched a wheel-to-wheel duel between Opperman and Bob Williams of Kansas City until lap 18 when Gritz went to the outside of Williams in turn two and then set his sights on Opperman.

On lap 27, Opperman, his face mask filled with mucus from a bad case of the flu, suddenly went high coming out of turn one and Gritz, half-blinded by watering eyes, slid under him and held on for the win.

Gritz picked up the $3,000 winner’s check plus another $40 in lap money. It was only the second feature win in two years he has been racing on the Knoxville half-mile dirt oval and he said it himself, “This is the biggest win ever.”

In the winner’s circle, Gritz said his eyes watered so bad for the last 10 laps that he had difficulty seeing the infield. He was burned Saturday morning while helping a teammate do some welding and sparks from the torch ignited the gasoline and the tank exploded, spraying Gritz about the neck and face.

Opperman, a Californian who moved to Lincoln, Neb., a year ago, dueled Bob Williams from lap to 18, came down with the flu early in the week, ran his best race of the season.

He and Williams exchanged the top spot three times before Gritz worked his way past them. He said his rubber face mask began to fill with mucus and he was gagging so bad that he couldn’t concentrate on track position. He finished several car lengths behind Gritz, and Williams followed in third.

Defending champion Ray Lee Goodwin of Kansas City who had the pole position after posting a track record of 20.68 seconds in time trials on Thursday, was sidelined early when he pushed into a light pole by Leonard McCarl of Des Moines in the first heat. 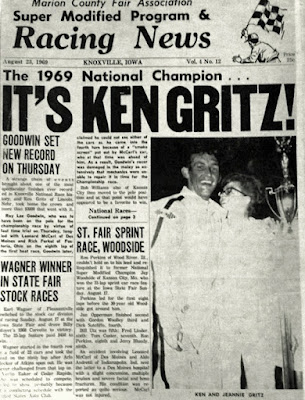