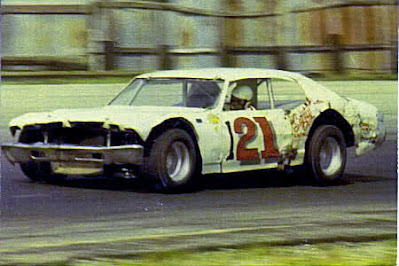 Hartford, Mich. (August 20, 1971) – Drivers John Benson and Bob Senneker are best of friends off the racetrack

But on the oval the two Grand Rapids natives are all business.

Their personal battle on the asphalt ended in a dead heat Friday night as both drivers were big winners in the Invitational 250 at the Hartford Motor Speedway.

Benson won the first 50-lap segment, while Senneker came back to capture the second 50- lap feature. Both drivers pocketed $500 for their first-place finishes.

Benson, behind the wheel of a 1969 Chevelle powered by a 454-cubic inch engine, started on the pole in the first 50 lapper because of his top qualifying time of 20.97.

The 15-year veteran of the racing wars never lost the lead as he finished a comfortable half lap ahead of runner-up Senneker.

By virtue of his winning the first feature, Benson was again on the pole of the second 50 lapper - but not for long. His old pal, Bob Senneker, saw to that.

Senneker, urged on by a large contingent of the estimated 2,500 fans, breezed past Benson on the third lap.

On the 16th lap, the first yellow caution flag of the race was waved when Herb Kirts lost control of his semi-late model stock on the front stretch, smashed into a bunker and scattered dirt all over the track. But he immediately returned to the action after a quick dusting off.

Jim Gilmer sailed off the fourth turn and plowed into the retaining wall on the 26th lap, but he too recovered and returned to the business at hand.

The steady Howe finally caught Senneker on the 35th lap, but that was short-lived as Senneker regained the lead the next time around the half-mile track.

Senneker shrugged off all challenges from that point and finished a car's length ahead of Howe. Benson hugged Howe's bumper to grab third, while Rich Senneker was fourth and Barnard fifth.

For Benson, the opening feature win meant more money in the bank. He picked up $3,309 in capturing the Michigan State Invitational race last Saturday at Berlin Speedway near Grand Rapids.

"I'll tell you these long races really tire a guy out," said a happy but fatigued Benson following his victory.

"I think of my victory as a team effort - just like a football club needs teamwork," he continued. "I couldn't do much without my two mechanics. They keep me moving."

Benson, who is a brakeman for a railroad in Grand Rapids, limits his racing now to two nights a week.

"I still think this track is the best in the Midwest," he added. "They could improve the lighting, but otherwise it’s really fun to race here."

For Senneker, racing is a vocation rather than an afterhours hobby. He is a professional race car driver who has $20,000 invested in his 1969 Chevelle.

"I don't recommend this kind of work for everyone," Senneker smiled, "But it’s fun and exciting."

The 26-year-old bachelor, who motors around Midwest ovals four evenings a week, comes from a racing family. Besides Rich, he has a younger brother, Terry, who also was on hand for Friday's action.

An early casualty Friday was Joe Ruttman, who was one of the top favorites. He blew his engine in the pits even before he had a chance to qualify.

Ruttman, who owns the track record of 20.29 seconds, is the brother of Troy Ruttman, the 1952 Indianapolis 500 winner.

While the cars were cooling off, getting refueled and being checked over by the mechanics between the two 50 lappers, George Neff of Coloma nipped Al Leversee of Kalamazoo to win the semi-feature.

Heat winners were Barnard of Ann Arbor, Kirts of Elkhart (Ind.), Butch Miller of St. Joseph and Jerry Griffith of Hartford. The victory was Miller's 101st heat win of the season. 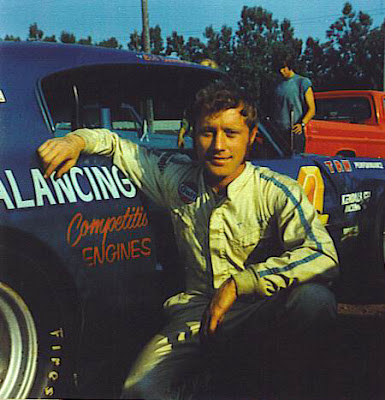