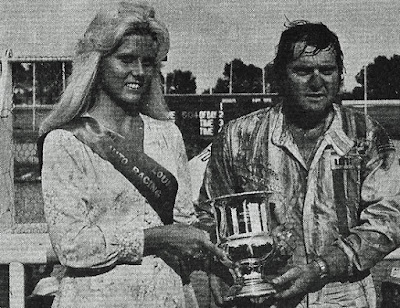 Taking over the extra car, when his regular mount had engine trouble during warmups, Hartman qualified second fastest to polesitter Jack Bowsher of Springfield, Ohio. He then took the lead on the 14th lap, lost it when he pitted for gas on the 29th, came back to regain it on lap 49 and then stayed on top to take home the win before 8,137.

Second place money in the $19,087 purse, went to Sal Tovella of Addison, Ill., in a Plymouth, who finished some five seconds behind Hartman. Third was Irv Janey of Cedar Rapids, Iowa, in a Dodge, with Ramo Stott of Keokuk, Iowa, fourth in a Plymouth. Finishing fifth, one lap behind them were Bay Darnell of Deerfield, Ill., in a Dodge and Don White of Keokuk, Iowa, took sixth in a Dodge.

Bowsher won the pole in his 1973 Ford Torino with a time of 38.336 seconds. The start of the race was held up until 3:40 pm in unsuccessful attempts to settle the dusty track surface by watering the one-mile dirt oval.

The field finally took the green to a cloud of dust, with Bowsher leading over Janey and Hartman. The yellow came out on the first lap when tailenders Mark Dinsmore of Covington, Ind., and Ray Bohlander of New Berlin, Wis., tangled in the fourth turn before ever getting to the green flag.

The green flag waved again on the third lap and Bowsher again took off with the lead. Hartman trailed in third until lap 14 when he put a move on both Janey and Bowsher to take command.

Bowsher was out of the race by lap 20 with an overheated engine.

Terry Ryan of Davenport, Iowa, spun in the first turn on lap 28 and was tail ended by Ernie Derr, who said he could not see Ryan in the dust until it was too late.

With the yellow out, Hartman dove into the pits for fuel, but Stott stayed out and inherited the lead.

The pit stop dropped Hartman to fifth, but he was on the move again shortly afterward, taking third from Fred Zack of Milwaukee on the 34th lap, second from Don White on lap 47. Two circuits later, Hartman scooted past Stott for the lead he never relinquished.

Tovella made a late charge to take second on lap 69 could not catch the flying Hartman.