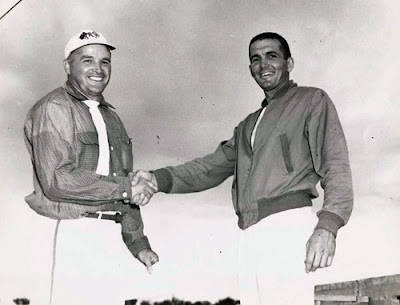 St. Paul, Minn. (August 29, 1954) – Don Carr of Jackson, Mich., who all afternoon hadn’t won enough to pay for the fuel his powerful Offenhauser was burning, brought the 27,351 spectators to their feet by setting a new national record in winning the 20-lap feature at the Minnesota State Fair on Sunday.

With a standing-room-only crowd looking on, Carr churned the 10 miles under near perfect track conditions and was clocked in 8 minutes and 22.47 seconds, more than 10 seconds below the old standard set by Deb Snyder on the same track two years ago.

Snyder, ironically, was one driver who chased the Michigander to the new mark on Sunday afternoon. The Kent, Ohio, veteran, however, had to settle for third place as Homer Claytor, Tampa, Fla., took runner-up honors. Marvin Pifer, Adrian, Mich., was fourth as he dueled with Snyder in a battle of Offenhauser’s.

The show, a display of skillful driving by 34 speedsters, saw not a single mishap except for facia cuts suffered by three drivers. Scotty Scoville, Kansas City, was removed to Bethesda Hospital when a rock broke his windshield and hit him in the eye. Jerry Kemp, St. Louis, and Willie Thompson, Mill Valley, Calif., needed medical attention for cuts suffered from flying gravel.

Carr went into the last event with only a fourth place in the first heat to his credit. That netted him $30. For his first-place finish in the feature, he picked up $650 from the $6,000 total purse.

Carpenter, piloting a purple-colored chrome job pretty enough to park in your own living room, was the day’s only double winner. He won the third heat in 2 minutes and 25.5 seconds, a shade off the IMCA national 6-lap record. Snyder took the first heat and Bob Johnson, St. Paul, outran three Offenhauser’s in his Ranger to take the second heat.