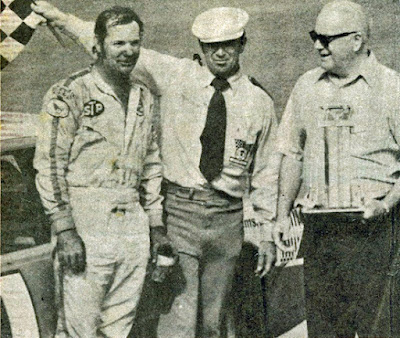 Wausau, Wis. (August 13, 1972) – The International Motor Contest Association new model stock car racing has tightened up considerably with the departure of 12-time champion Ernie Derr, but no one could prove that to Irv Janey Sunday on the Wisconsin Valley Fair half-mile.

Janey, one of seven different drivers to win a IMCA feature this season, became the first driver on the circuit to post two wins on the same day as he roared past the field to take the checkered flag in both the 100-lap even in the afternoon and the 50-lap affair Sunday evening.

It marked the second straight year that Janey has won both ends of a day/night doubleheader and he was also a repeat heat winner both afternoon and evening. The other two heats were won by M.J. McBride of Shawano, Wis., fast timer for the day, and McBride offered the stiffest challenges in both feature races.

Janey took the lead in the 100-lap feature on the fourth lap and never relinquished it. His time for the race was 53 minutes and 16 seconds, just six seconds off the track record for that distance despite eight caution periods for a total of 34 laps. McBride was the only other finisher on the same lap.

McBride took the lead from Gordon Blankenship of Keokuk, Iowa, on the second lap of the nightcap and held it until Janey sped past him on lap 17. Janey put the pressure on McBride almost from the onset and found no room to pass for several laps. However, he pulled alongside McBride in the first turn of lap 17 and stayed there.

As Janey moved, the two lead cars came together momentarily and Janey’s 1971 Plymouth, a back-up car, left the ground for a split-second. When he landed, he had the lead. In the final turn of the same lap, McBride ran into the rear of Janey’s car.