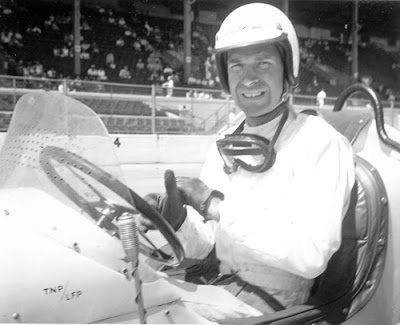 Springfield, Ill. (August 22, 1959) – Veteran 34-year-old Len Sutton from Portland, Ore., shot into the lead on the 52nd lap Saturday afternoon and went on to capture the 100-lap big car race by 17 seconds at the Illinois State Fair.

Sutton took the lead when Don Branson, Champaign, Ill., had to make a pit stop because of tire trouble.

Branson, who won the pole position with the fastest qualifying time, had led all the way to the 52nd lap.

After the pit stop, he was in about seventh place but moved back up to second before the race ended on the fairgrounds’ mile oval.

Sutton’s winning time was 1 hour, 3 minutes and 2 seconds, about 96 miles per hour.

Rodger Ward, this year’s Indianapolis 500 winner, was given last place among the 18 starters in the race.

Behind Keller the drivers finished in this order:

Jud Larson of Tampa, Fla., who qualified with the second fastest time in the field, collapsed before the race and was taken to the hospital with a mild heart attack. He will be confined to the hospital for a few days. Bobby Grim replaced him in the seat of the Bowes Seal Fast Special.

Sutton started eighth in the 18-car field and moved steadily to the front. He passed Sachs for second on the 52nd circuit before taking over for keeps three laps later.

Branson experienced much the same fate as he did last year. In both races he grabbed the lead from the start and was running away from the pack when tires failed.

He dropped back to eighth position after stopping for 21 seconds. Aided by car failures by his competitors and hard driving on his own part, Branson moved back into second position on the 71st lap when Jim Packard encountered engine trouble that dropped him back to thirteenth at the finish.

Thomson’s fourth place finish gave him 1,080 championship points and moved him to within 40 points of Jim Rathmann, who did not compete here.

The race was accident free and there was only one incident in practice. Ralph Liguori of Tampa, Fla., spun his Forbes Special in the north turn in practice Neither he nor the car were hurt.