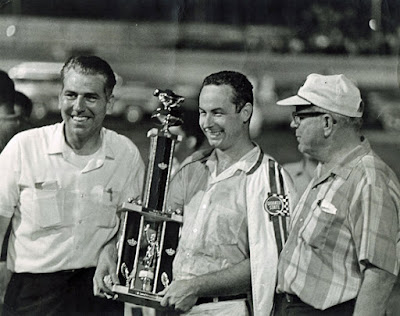 Louisville, Ky. (August 3, 1968) – Jim Robinson of New Albany, Ind., won the International 500-lap stock car race at Fairgrounds Motor Speedway on Saturday night – after which he was fanned by a platinum blond in a red miniskirt and kissed by a 6-1, 225-pound fellow.

If that sounds a bit backward, it is only typical of the goings-on before 6,500 spectators at Louisville’s richest auto race ($1,850 to the winner, more than $9,000 overall purse).

Robinson won. He went the entire 500 laps. He finished nearly six laps ahead of another New Albany driver, Bill Clemons.

From there on, it becomes more difficult to explain.

Robinson, you see, was driving the 1967 Chevelle owned by Bill Kimmel (the 225-pounder) of Clarksville, Ind. Kimmel, according to his pre-race strategy, was going to take over for Robinson after 260 laps.

Instead, Les Snow of Bloomington, Ill., became ill and asked Kimmel to relieve him.

So, when Robinson came in for gas on lap 260, Kimmel was out driving.

“Can you keep going?” Kimmel’s crew chief asked Robinson, a 30-year-old father of three who was leading the late model point standings at the track.

(Later, Robinson was taken to an area hospital where he was treated for heat exhaustion)

Already, the heat and fumes and fatigue had bothered some people. Bobby Watson, whose car went out with a broken brake after 160 laps around the quarter-mile track took over for Benny Parsons when, according to Parsons, “I just got too hot.”

Snow, a 41-year-old veteran of more than 20 years of auto racing, asked Kimmel to take over the wheel after 132 laps.

“I got sicker than hell,” Snow said. “I couldn’t even hold my head up.”

Kimmel drove for Snow for the next 280 laps. Then the Illinoisan took over and went the last 76 circuits to finish third, six laps behind Clemons.

Through it all came Robinson.

After giving the Robinson a big kiss before the trophy presentation at the finish line, Kimmel said these were his instructions to his driver.

“I told him not to race. If someone wants to race, I said, just let him go. Steady wins this race.”

And while Robinson sat in a chair on the track, hardly able to talk, the blonde fanned him with the chalkboard and Kimmel was still talking.