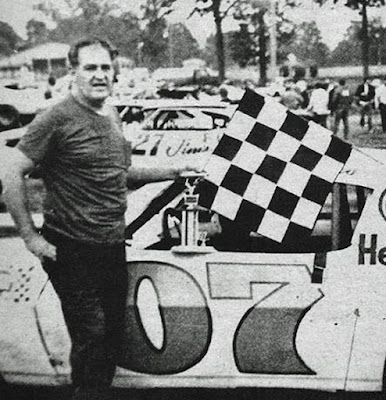 Rockford's Sam Reakes displays his trophy and the checkers after winning the late model super stock feature at the West Liberty Fair.

West Liberty, Iowa (August 10, 1974) – Sam Reakes of Rockford, Ill., came to the West Liberty Fair and went home a winner, as he wheeled his race car across the finish line to win the late model super stock feature Saturday night.

Reakes earned the pole position for the feature event and then dueled with Ron Weedon of Pleasant Valley for the checkered flag. After a bumper-to-bumper battle for 20 laps, Reakes distanced himself From Weedon for the remaining few laps to win handily.

The other battle was for third place with Curt Hansen of Dike, Darrell Dake of Cedar Rapids, and Ron Prymek of Iowa City. At one point or another throughout the 25-lapper, all three drivers swapped positions with Hansen, Dake and Prymek finishing in that order.

Dave Birkhofer of Muscatine and Tom Hearst of Wilton tangled in the first turn of the feature, with Hearst taking the brunt of it when he hit the wall hard. His car was scratched while Birkhofer was able to continue but was not a contender.

Gary Frauenholz of West Liberty made a clean sweep of the street stock competition, winning both his heat and the 15-lap feature.