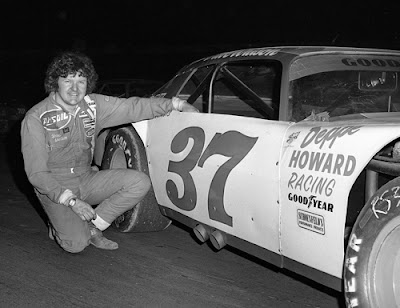 Dave Watson had reason to smile after winning both 50-lap features at the ARTGO Summer Classic at Grundy County Speedway. - Stan Kalwasinski Collection

Morris, Ill. (August 8, 1976) - Dave Watson of Milton, Wis. was the big winner Sunday night at the Grundy County Speedway in the Twin 50-lap ARTGO Summer Classic which played before another full house under ideal weather conditions.
Watson won the first 50-lap feature by inheriting the lead from Jerry Kemperman in the 31st lap when Kemperman, who had led for 21 laps, suddenly dropped out.

Bob Strait took the initial lead in the second 50-lap con test with Reffner running through the field on the outside groove Reffner passed Mike Miller for third in the 13th lap, edged Tom Musgrave for second in the 15th lap and overtook Strait in the 16th for the lead.

Reffner looked like a sure winner as he pulled away from the field, but Senneker took second on the 24th just as the race ’s only yellow flag was needed when Young spun and retired with mechanical problems.

The cars were bunched on the restart with Reffner leading followed by Senneker and Watson and the trio pulled away from the field. Watson took second on the 30th lap and started to close on Reffner.

Watson finally caught Reffner on the 41st lap and the final nine laps were among the wildest ever seen at the Grundy third-mile oval as Senneker joined the fray and the three weaved through heavy traffic.

Watson and Reffner raced wheel-to-wheel for several laps and then Watson pushed his Nielsen Enterprises into the lead for his 30th feature win of the season.

In the final scramble at the finish Senneker got by Reffner for second. Fourth was Ruttman and Jones won the hectic battle for fifth money over Miller, Kemperman and Musgrave.

Larry Schuler, who came into Sunday night’s show with 34 feature wins, tangled with Joe Shear in the 9th lap of the first 50-lapper and sailed into the pit wall, knocking his car out of the balance of the program.