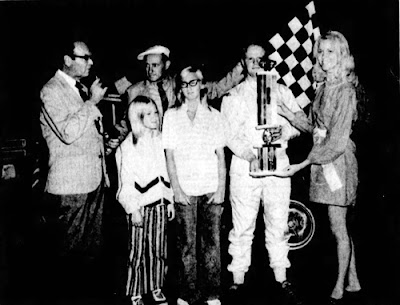 Steve Schultz receives his trophy from Miss Sedalia, Cindy Heeren. Flagman Al Hall holds the checkers while Jimmy Glenn prepares for an interview with the winner. The two young girls are the daughters of Jerry Weld, who had been killed in an accident the year before.

Sedalia, Mo. (August 28, 1971) – Steve Schultz, a former schoolteacher and former Sedalian, was crowned the new Missouri Super Modified Champion on Saturday night at the Missouri State Fair. Schultz, who now lives in Carrollton, Mo., won the 18th annual event after inheriting the lead on lap 43 from leader Eddie Leavitt of Kearney, Mo., when Leavitt pulled to the inner guardrail during a caution flag for gas.

Schultz started on the pole position when the green flag waved and ran second for most of the 50-lap race to Leavitt, the defending champion.

The yellow flag waved a total of seven times during the contest, mostly due to spinouts, causing many of the driver’s precious fuel. Yellow flags were not counted as laps during the race.

One of those who fell victim to a lack of fuel towards the end of the race was Sedalia’s Bill Utz. Utz ran either second or third for much of the race until the 50th and final circuit when his car started to sputter on the backstretch, while he was running a close second to Schultz, and as they came to the checkered flag.

In the last quarter mile, Utz dropped all the way from second place to sixth as four cars passed him in the final 100 yards.

Bob Ford of Marshall, Mo., had his most profitable day by nailing down runner-up honors. Ford, wo started near the rear of the 23-car field, drove a steady race, and cashed in on other driver’s mistakes.

Leavitt had the lead two different times in the race; he took it from the start as the field entered the first turn, but dropped back to sixth place on lap 17, when he momentarily lost control of his racer between the third and fourth turns.

That gave Schultz the lead, but Leavitt charged to the front once again and regained the top spot on lap 24. He stayed there until the 43rd lap, when he was forced to pit on the yellow flag.

According to the rules, Leavitt had to rejoin the field at the rear. That didn’t seem to bother Leavitt, however, as he mounted another charge to the front of the pack and finished an impressive third.