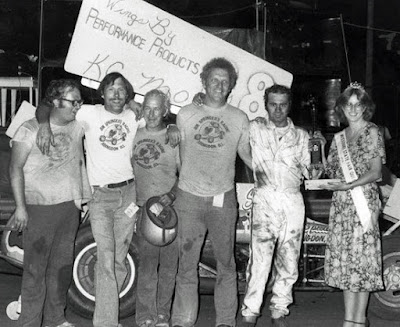 Sonny Smyser is joined by his crew after winning the 30-lap IMCA sprint car feature at Sedalia.

Sedalia, Mo. (August 21, 1977) – Sonny Smyser had the pole position at the start, and he simply refused to relinquish command in winning the 30-lap IMCA sprint car race on Saturday afternoon. The race highlighted the first of six scheduled IMCA-sanctioned events at the Missouri State Fair.

The matinee program of sprint car racing was accident free and only one time did the yellow flag wave.

Smyser, who hails from Lancaster, Mo., was optimistic of his chances in the race as he talked highly of the sprint car he was to compete in. This was only the third time for him to pilot the sprint car owned by Jim Springer of Abington, Ill.

Smyser, Springer and their crew were mighty happy with the way the car performed afterwards as Smyser were able to stave off a couple of hard chargers in Jimmy Boyd of Sacramento, Calif., and Doug Wolfgang of Des Moines, the latter having just won the Knoxville Sprint Car Nationals.

It was that kind of day and that kind of track, however. Drivers found it difficult to maneuver and once a firm lead was established, there was little to no passing. The speeds were good, and the driver technique was excellent, it was just not a track surface conducive to side-by-side negotiating.

Smyser received $700 for the first-place finish and an additional $200 for having Firestone tires on all four wheels.

He gained the pole position by having the sixth fastest time of the 36 entries in qualifying – with the feature lineup being arranged so the first six spots were inverted.

The fastest qualifier of the day was Wolfgang in 22.93 seconds. He was the only driver to turn the half-mile in under 23 seconds.