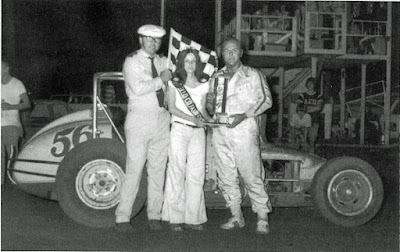 Utz found the victory that had eluded him consecutive nights at Knoxville, Ill., the week before, in which he finished second on both outings.

Utz made the 25-lap trip in 10 minutes and 29 minutes, eclipsing Dick Sutcliffe’s record by a full 14 seconds. Utz, in his past three races, has made a spectacular climb in the IMCA point standings, moving from 19th to seventh in points.

Utz also won the STP trophy dash, which made it three in a row for him.

Both the 8 and 10-lap records fell as the track was smooth and tacky, and especially fast. Daryl Dawley of Sioux Falls, S.D., who owns the one-lap qualifying record at Eldon, of 22.92 seconds, set a new 8-lap record of 3 minutes and 10 seconds, bettering Ron Perkins record of last year by 13 seconds.

Earl Wagner of Pleasantville, Iowa, was the fastest man in qualifying, setting a time of 23.04 seconds. Dawley, Bob Fisher of Madrid, Iowa, and Bill Cohee of Topeka, Kan., were heat winners while Cliff Blundy won the consolation.