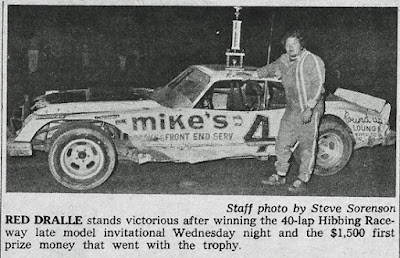 Red Dralle of Evansdale, Iowa, outmaneuvered Jones in heavy traffic during the final two laps of the $11,000 event.

Jones had led for 38 laps but got blocked and lost the lead to Dralle while trying to lap five slower cars bunched together that refused to move over for the leaders. Dralle had trailed Jones for 26 circuits before his late surge when he slipped by on the inside just as the white flag was being unfurled. Jones tried vainly to regain the lead during the last lap but had to settle for a disappointing second place.

Steve Egersdorf of St. Paul drove his Camaro to a third-place finish, edging Bill Zwanziger of Waterloo, Iowa. The two were the only cars in the top-nine finishers that weren’t Ed Sanger-built chassis.

About 3,000 race fans were on hand for the third annual Iron Range Racing Association event. Dralle took home $1,500 for his evening’s work while Jones collected $1,400.