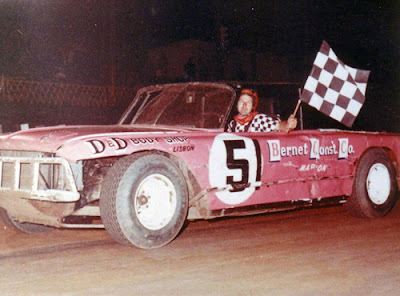 Roger Dolan takes a victory lap after winning the main event at the Sterling Speedbowl.

Sterling, Ill. (August 11, 1968) - It was a hard night on racing equipment, but the weatherman and all the other contributing circumstances finally team ed up to make Sunday night’s late model stock car racing program at Speedbowl Park here a real thriller from start to finish.

Two races, a semi-feature and a feature, had to be held over from last week’s rain -shortened program, thus making a total of 10 races throughout the evening.

Evidence of the keen competition is shown by the fact that there were nine different first-place winners, with Daehle Reitzel, Sterling, the only driver to win twice during the evening.

Roger Dolan, Tipton, Iowa, who won the feature at Speedbowl two weeks ago, duplicated this feat by finishing first in the regular feature. Lloyd Ewing, Kewanee, won the feature which was held over from last week.

The event hardest on equipment was this week's regularly scheduled feature. Trouble started before even one lap could be completed, as Fred Strube and another car brushed together, tearing the right door off Strube’s car.

Jerry Reinhart, Moline, had taken the lead initially in the race, slowed his pace somewhat after about five laps, with Walt Carney running hard in first place. Meanwhile Don Bohlander pulled alongside Rinehart’s car going into the number three turn and Lloyd Ewing promptly followed suit by pulling along the left side of Bohlander's machine.

As the three rounded this turn headed for the number four turn, Rinehart’s car swerved to the right, struck the wooden fence, and overturned. Fortunately, Rinehart was not injured; however, his car was heavily damaged.

For some unexplained reason, apparently mechanical difficulties, Carney, who was leading the race when the red flag was displayed, did not re-enter the restart lineup.

Thus, when the green flag came out again, Jim Strube jumped into the first spot. Dolan chased him for 10 laps before finally moving into first on the 16th lap.

This was no easy trick for Dolan, who was not only attempting to move into the top spot-light but at the same time was doing his best to keep ahead of Jim

Gerber, driving Verlin Eaker’s 1965 hemi-powered Dodge. When Dolan did get into first place, he was not about to let his 1962 Ford convertible be caught by anyone.

As the checkered flag came out it was Dolan, Strube Gerber, Jack Rebholz and Don Bohlander in that order for the top five spots.