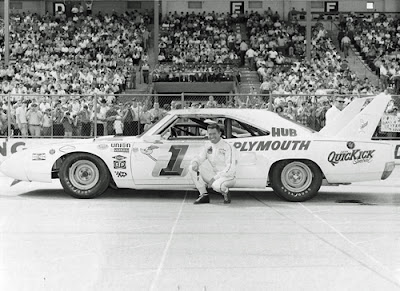 McCluskey led a parade of Plymouths – which took four out of the first five places – and the 400 points moved him so close to division leadership that USAC officials declined to release standings until they checked with headquarters.

Nelson himself took the lead from Butch Hartman of South Zanesville, Ohio, on lap 191after chasing Hartman’s Dodge Daytona for almost 50 laps around the one-mile paved oval.

Hartman finally pulled into the pit area overheating and all of the garden hoses his crew could find couldn’t cool it off again. Hartman attempted one more lap and then parked it.

Nelson was handicapped by this time as well. The chase of Hartman took its toll on his left rear tire, which was chunking apart, and Blankenship passed him in the final laps.

Jack Bowsher of Springfield, Mo., the stock car division leader, took over teammates A.J. Foyt’s 1969 Ford Torino and qualified it for the pole at 106.020 mile per hour. Foyt was competing in a dirt race in Springfield, Ill.

Bowsher took the lead from the green flag and held it until McCluskey took over on lap 4. McCluskey held the top spot until he pitted on lap 70. Verlin Eaker took over for one lap until Nelson gain control.

Nelson was out front until he pitted during a caution flag for light sprinkles on lap 126 and Blankenship took over for two circuits. Eaker then slipped back into the lead until yielding to Hartman on lap 141.

The yellow for the rain was one of only four during the race and lasted only 9 laps on an otherwise sunny 83-degree day.

Dave Whitcomb of Valparaiso, Ind., gave pit row a thrill when his drive shaft exploded, and he plowed into the pit wall. The yellow was out for 11 laps while track crew cleared debris.