1972 – Unser Scores on Dirt at Springfield 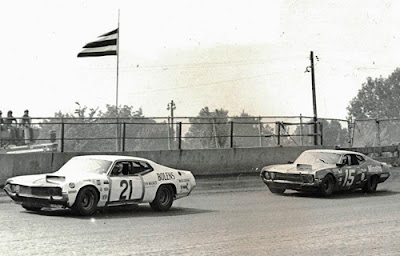 Jack Bowsher (21) leads Al Unser (15) during the USAC stock car 100-miler at Springfield. Unser would take the lead midway through the contest and eventually take the win.

Springfield, Ill. (August 19, 1972) – The flat, one-mile dirt tack proved to be the turning point for Al Unser on Saturday afternoon as he powered his 1971 Ford Torino to a convincing victory in the United States Auto Club late model stock car race at the Illinois State Fair.

The race was but three laps old when Jim Tobin and Sal Tovella lost control in the third turn causing mass confusion behind them. Jigger Sirois’ 1970 Mustang suffered severe damage to the rear end while Verlin Eaker’s 1969 Dodge ran up onto the inside guard rail, tearing up the fencing and almost tumbling into the ditch below.

After a 45-minute delay to clear the cars and debris from the track, 27 of the original 30 starters lined up for the restart.

Jack Bowsher immediately pressured the front-running Unser and the two veterans exchanged the top spot twice before Bosher decided to take his mandatory pit stop on lap 20. Unser, however, decided to stay out on the track and build a lead.

Unser’s strategy proved advantageous on the 44th lap as Bowsher blew his engine coming out of the fourth turn bringing out the yellow flag.

During the caution, Unser pitted, got back on the track and proceeded to coast to an easy victory, thus breaking a streak of bad luck that had plagued him on and off throughout the year.

Butch Hartman, the 1971 USAC stock car champion, finished second with Ralph Latham taking third and Don White grabbing fourth. Sal Tovella, after his lap 3 wreck, charged back to round out the top five.