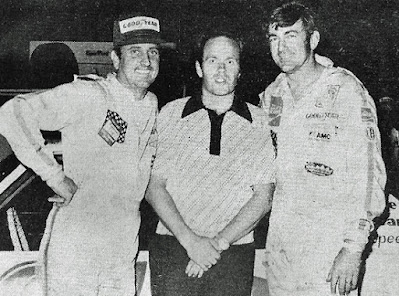 Wausau, Wis. (August 14, 1975) – A slight drift by visiting NASCAR star Bobby Allison on the 39th lap allowed Tom Reffner to take the lead and victory in the 50-lap feature of the “Race of Champions” for late models Thursday night at State Park Speedway.

The 50 was the highlight of the special show, which included two 25-lap qualifying features and guest appearances by Allison and Dave Marcis. The victory was Reffner’s 56th of the season, putting him only 11 wins behind Dick Trickle’s 1972 record.

Allison’s 1974 Coca-Cola Camaro started on the outside of the front row and the veteran driver, who has tried almost every kind of racing, immediately built a comfortable lead. Reffner, who was the fastest qualifier and had earlier captured his qualifying race, busily worked his 1974 AMC Javelin through traffic with Mike Miller in tow.

On lap 23, the “Blue Knight” saw daylight, taking third on that lap. Three laps later he was in second, but still a good distance behind the flying Allison. Then, Madison-area drivers Bob Gunn and John Ziegler spun in the second turn with Jim Back, Jim Bohmsach and Marv Marzofka also getting involved. Although all continued, the race was stopped with Reffner then being able to restart alongside Allison.

Allison roared ahead again at the drop of the green with Reffner on his heels. Miller joined them, and for the next 11 circuits, Miller tried the low groove around the Alabama ace while Reffner worked the high side of the track. Unsuccessful in their attempts, both drivers dropped back a short distance to rest up for the final attempt.

However, Allison drifted a bit too high on lap 39 and Reffner, with Miller right behind, flashed past. Allison tried to recover his lost position but had to settle for third. Further back, Rick Haase and Neil Callahan finished fourth and fifth.