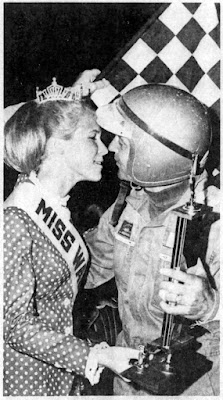 Wausau, Wis. (August 7, 1969) – It was a good night for Wisconsin drivers in the IMCA Grand Championship Sprint Car races at the Wisconsin Valley Fair on Thursday night.

Russ Laursen of Cumberland, Wis., drove his Chevy-powered car to first place in the second heat and the 25-lap feat, while Tom Bigelow of Whitewater, Wis., won the Australian Pursuit, which served as the consolation event. Bigelow’s car was also Chevy-powered.

A good crowd of over 4,000 were on hand at the half-mile dirt track at Marathon Park. The race program was relatively free of any accidents, with only a few minor spinouts slowing the action.

The most serious accident took place during the warmup for the first event when Aldo Andretti, the twin brother of Indianapolis 500 winner Mario Andretti from Nazareth, Penn., climbed over the back wheel of another car and bounced off the retaining wall right in front of the grandstand. Andretti was unhurt but the front axle on his car was bent, and he was forced out action for the rest of the evening.

This was especially disappointing to fans as Andretti was driving a $25,000 Ford-powered car built by his brother.

There were no other double winners in Thursday’s action although Buzz Rose of Lomita, Calif., turned in the night’s fastest time in qualifying and then went on to win the second heat. His time in qualifying was 24.80 seconds compared to the track record of 24.10 seconds set in 1966 by Jerry Richert.

Laursen displayed some excellent driving as he took away the lead from Bigelow on the final curve of the second heat and survived two spinouts by other cars in winning the feature. Bigelow, who was making his first-ever appearance behind the wheel of a big car after racing midgets, spun out on the eighth lap and Rose did the same on lap 19 when he was in third place.