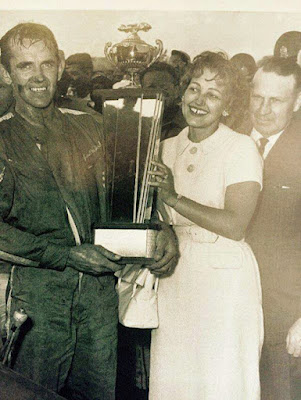 Jim Packard is joined in victory lane by his wife Betty after his win at Springfield.

Springfield, Ill. (August 20, 1960) – Jim Packard of Speedway, Ind., with his motor purring like a kitten, lapped all but Eddie Sachs of Outer Valley, Penn., to win the 100-mile United States Auto Club championship race at the Illinois State Fairgrounds on Saturday afternoon.

Elmer George, also of Speedway, Ind., and participating in his first championship race of the year, finished third. Following behind were Lloyd Ruby of Houston Tex., and Wayne Weiler of Phoenix, Ariz.

Several cars exited the race early on account of spinouts or mechanical issues. Several restarts were necessary due to the rough conditions of the track and heavy shower which occurred at the end of 20 laps.

Starter Billy Vandewater dropped the green flag, and it was pole-sitter Don Branson of Champaign, Ill., scooting out in front. Branson, who turned the fastest lap in qualifying with a time of 34.50 for the mile, would lead the first 16 circuits before dropping out with motor troubles.

With Branson out of the picture, the 28-year-old Packard, a veteran of five seasons, would take over the lead and never relinquish it.

A.J. Foyt of Houston, Tex., and Bobby Grim of Indianapolis, Ind., would collide on lap 2 and retired for the day. Jim Hurtubise of North Tonawanda, N.Y., the rookie sensation, spun out on lap 10 but would battle back to finish tenth.

Branson would make the necessary repairs to his car, restart at the rear of the field and finish a respectable seventh.

Local favorite Tony Bettenhausen of Tinley Park, Ill., was unable to make the call after the rain-delay and was credited with 15th place.