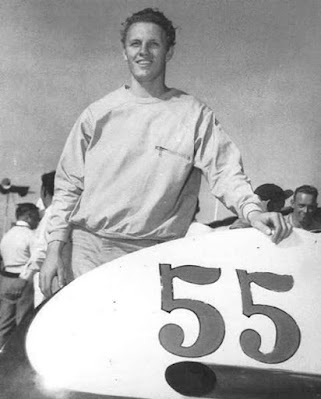 Two years before he would become Indy 500 champion, Troy Ruttman made an appearance in Cedar Rapids and came home a winner. - Troy Ruttman Family Collection

Troy Ruttman, picked by many to not even place in the first three spots, stole the main event from Johnny Parsons and Tommy Hinnershitz.

An estimated 5,200 fans jammed the grandstand despite the threatening weather and roared its approval of the first AAA-sanctioned event in Iowa since 1938.

Parsons, the 1950 Indianapolis 500-mile winner and national AAA champion, was picked by racing bugs to have a red-hot duel with Hinnershitz, the Eastern AAA champion. Hinnershitz drove “Big Red” a powerful Offenhauser which the late Ted Horn piloted to 25 consecutive dirt track triumphs and 83 track records.

But nobody mentioned Ruttman until his appearance in the first heat. Racing one of 13 Offenhauser's in the field, Ruttman made his hit with fans placing second to Hinnershitz in the heat.

The Californian also had the fastest time of 19 entrants in qualifying, traveling the half-mile in 23.95 seconds.

The feature started as expected with Parsons leading, Duane Carter of Detroit in second, Hinnershitz third and Ruttman in fourth position for the first 11 laps.

Ruttman made his bid on the next lap, passing Hinnershitz at the start/finish line and holding that position until lap 23. The youth shot ahead again on the curve and blew past Carter to take over second and stick on Parson’s tail.

Fate then played her hand as the $14,000 Parsons-piloted Offenhauser developed rear-end problems on the 24th lap and had to drop out, only one lap from the finish.

Ruttman only had to coast home to take the first prize.

The fifth event of the afternoon, involving two cars, in a special match race, turned out to be a three-car race instead. The 19 drivers were assembled on the front stretch with two contestants to be picked by the applause of the audience.

The fans wouldn’t choose between Parsons, Hinnershitz and Ruttman, so Sam Nunis gave in to public acclaim and let the three drivers race. Ruttman won this special 2-lap race, again coming from second to first on the curve.

Joey Ray, the only Negro in Big Car racing, failed to make the feature qualifications as did Jerry Hoyt. An Indianapolis resident, Hoyt drove the only racer in the field that competed in the 1950 Indianapolis 500-mile event. Hoyt was also the youngest driver entered, at 21 years of age.