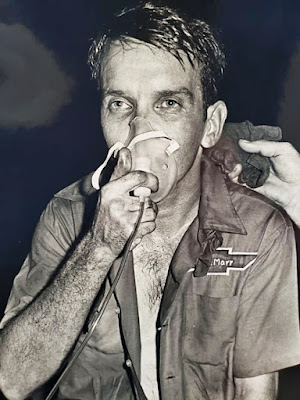 LaMarr Marshall takes on oxygen after winning the International 500 at Fairgrounds Speedway.


Louisville, Ky. (August 15, 1970) – Luck finally took a ride with popular LaMarr Marshall, and he outdueled the driving team of Roy Wathen and Dave Kulmer to win the closest International 500 in history at Fairgrounds Speedway on Saturday night.

When Marshall, looking like a man ready to collapse, took the checkered flag, he was less than half a lap ahead of Kulmer – but he was a runaway winner as far as the crowd of 6,000 was concerned.

Marshall admitted that luck, something he had not been having this season, held a hand in the victory that earned him $2,200 of the $9,000 pot.

“I’ve been fast enough to win all year, but we’ve had some minor things happen to the engine. Tonight, we put it all together and things went right for us,” said LaMarr, supporting himself against the body of his 1970 Chevelle.

Marshall got his big break, meanwhile, when he passed Kulmer a moment before a caution flag flew after a minor mishap. That left him less than a lap behind Kulmer, but in front of him at the moment of the race.

Under the technicalities of the race, the leader must front the pack during a caution period, so Marshall was sent to the rear of the field, allowing himself to make up more than half a lap by which he trailed Kulmer.

Finally, on lap 385, he passed Kulmer’s canary-yellow Camaro for good.

“I knew if I didn’t make a mistake, I should be able to hold on the rest of the way,” Marshall remarked. “But I got awfully tired and really sloppy the last 50 laps.”

“I eased up and let him (Marshall) close on me because I figured I had enough of a lead,” Kulmer said afterwards. Then that thing happened with the caution flag. The truth is, I was leading when it went up.”

Wathen, the king of the speedway drivers, also was disappointed with the result.

“I could have gone all the way,” he said. “Heck, I was just getting my second wind when I retired, but the car belongs to Dave, and we had an agreement that we would split the driving.”

The pre-race favorite, Ramo Stott of Keokuk, Iowa, never was much of a factor. He qualified 11th in the 30-car field and got no closer than fourth all day.

After it was over, Ramo laid stretched out in the pit area, a crew chief applying ice to his chest and towels to his forehead.

Marshall, who qualified first with a time of 16.08 seconds, drove the full 500 laps for only the second time in the 10-year history of the race.

“But I’ll tell you this,” said LaMarr, preparing to whiff oxygen, “I’m never going to do it again.”