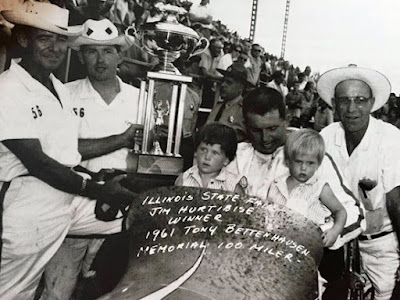 Jim Hurtubise is joined by his children and pit crew after winning the Bettenhausen Memorial at Springfield.

Hurtubise took the lead from Parnelli Jones on the 21st mile and held it the rest of the way. He finished nearly a mile ahead of second place A.J. Foyt, the Indianapolis 500 champion from Houston, Tex. Dick Rathmann of Roselle, Ill., finished third in the field of 18.

A pit stop on lap 40 to change tires probably cost Foyt a victory. He was running a close second to Hurtubise at the time. Upon his return to the track, he fell far back in the field but drove a daring race to finish second.

Hurtubise didn’t require a pit stop. After gaining a big lead, he coasted around the turns, saving wear and tear on his tires and engine for the last 20 laps.

A.J. Shepherd of Gardena, Calif., finished fourth and Shorty Templeman, the 42-year-old pilot from Seattle, Wash., was fifth. Shepherd made a costly 40-second pit stop for new tires after 75 miles when he was in second place. Foyt passed him at the time.

Neither Rathmann nor Templeman made pit stops.

Jones, after posting the fastest qualifying time on Saturday before rain postponed the event, encountered engine trouble after leading the event early on. The Torrance, Calif., youngster was a half-mile ahead of Hurtubise when he ran into trouble. Jones kept his car in the race, however, and finished 11th.

Don Branson of Champaign, Ill., came into the pits on the 45th mile while in sixth place. Allen Crowe of Springfield, whose car went out with magneto issues, took over driving duties for Branson but would later drop out on lap 76 with engine trouble.

Hurtubise collected $5,000 for the victory.