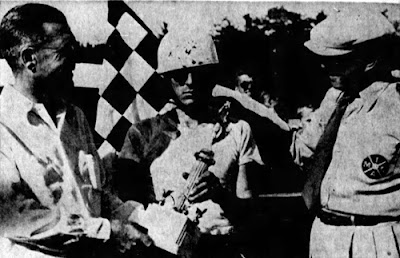 Wausau winner Don White receives his trophy from Wes Steffke, a judge at the races, while starter Al Sweeney presents the checkers.

The slender, 27-year-old driver from Keokuk, Iowa, who has competed on dirt tracks for only five years, led from start to finish to beat out highly regarded Herschel Buchanan, the Shreveport, La., veteran who won here a year ago.

White, awarded the first-place trophy and $400, recorded a near-perfect race. Placed on the pole position because his fast time in qualifying, White was quickly off to a lead he would keep for all 100 circuits. Maneuvering skillfully, the Iowan managed to steer clear of traffic jams on curves and had unperturbed going most of the time to win in 1 hour, 3 minutes, and 23.7 seconds.

Buchanan, who was not able to trim appreciable distance from White’s early lead, earned second place money of $300. In third, Pete Peterson of Chicago was $200 while collegian Sonny Gross of Quincy, Ill., collected the $175 fourth place money.

Only White, Buchanan, Peterson and Gross in the 21-car field, finished the entire 100 laps.

With White in command throughout, major interest of Fair spectators was centered on the duel between Buchanan and Peterson who waged a dogged scrap. Gross held the second spot for 26 laps when he fell behind to watch the other two contestants race almost bumper-to-bumper for runner-up honors.

Peterson led Buchanan briefly, but the Dixie man took over the runner-up spot on lap 45 and held it, despite Peterson’s stern challenges.

None of the track aces threatened the record of 59 minutes and 8.30 second set by Buchanan here two years ago. White, however, came close to the one-lap mark in time trials, making the distance in 33.95 seconds. The record, 33.05 seconds, is held by Matt Perlick, Minneapolis, set two years ago.