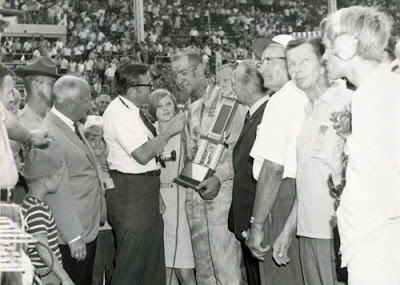 Norm Nelson is interviewed by Chris Economaki in victory lane after winning the 100-miler at Springfield. – Wayne Bryant Photography

But Jones and fourth place finisher Butch Hartman of Zanesville, Ohio, protested that Nelson gained unfair ground when he passed cars while yellow flags were being waved.

Third was Don White of Keokuk, Iowa, driving a 1968 Chevrolet. Roger Regeth of Appleton, Wis., was fifth in a 1967 Plymouth.

Editor’s Note – Five days later, United State Auto club officials upheld the protest of Parnelli Jones and ruled that he, instead of Norm Nelson, won the race. The effect of the action was to put Jones first, Don White second, Butch Hartman third and Nelson fourth.

Ten day later, Nelson was reinstated as the winner after he appealed claiming that although he had passed during a yellow flag, he corrected the error and returned to his original position before the green flag was thrown. Jones was dropped back to second.

On September 26, 1968, Jones announced that he had submitted his resignation to USAC. The winner of the 1963 Indianapolis 500 said he was quitting in protest over “reversal of a decision” regarding the winner.