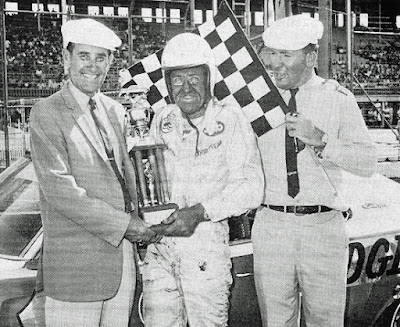 Derr, driving a 1968 Dodge, collected $850 for the hard-fought victory, which saw the lead change hands seven times, with Derr holding the advantage for a total of 85 laps.

Ramo Stott, also of Keokuk, Iowa, had his 1968 Plymouth Roadrunner in the lead for 112 circuits before wheel bearing problems sent him to the pit area in the late stages. He still managed to finish sixth and collect $250.

Lenny Funk of Otis, Kan., finished second in a 1966 Ford. Bill Moyer of Des Moines, driving a 1968 Corvette, finished third holding on to a loose roof for the final 50 laps. For his efforts, Moyer took home $550.

The program was marred by a fire in the pit area when a gas tank exploded, sending three men to an area hospital with burns.

Frasson mentioned that he had just doused himself with water before the blast. He credited the flame-proof suit he was wearing from being more seriously injured.

He said he had stopped the car over a puddle of gasoline and the exhaust from his car apparently ignited it as crewman were filling his tank.

Firemen and safety crew were on the scene immediately and quickly extinguished the fire. Frasson said the seats and roll bars were melted.