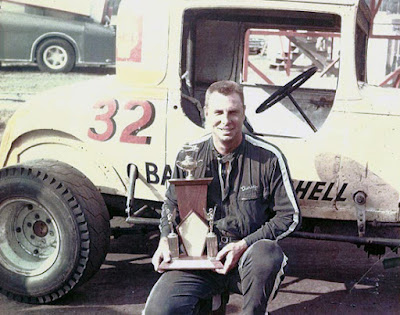 Des Moines, Iowa (August 31, 1961) – Temporarily outlawed by his own racing circuit, Charlie Moffit, the big Stanwood, Iowa, farmer, added the senior jalopy championship to his junior title before an estimated crowd of 4,200 at the Iowa State Fair on Thursday afternoon.

Warnik protested Moffit’s pass on the yellow flag, but it was denied since the International Motor Contest Association rule was waived by agreement among the drivers prior to the program.

Moffit, wheeling Howard Purvis’ Chevy-powered 1939 Ford, caught the green flag just as he was coming out of the fourth turn, after gunning past Warnik.

Warnik, driving a Corvette creation of Des Moines’ race promoter Marion Robinson, had regained the lead from Moffit on lap 18 after losing it to his rival on lap 11.

At that stage, there were eight cars stalled on the track, five in the west turn.

One was the Buick flyer, owned and driven by Knoxville point leader Earl Wagner of Pleasantville.

Wagner trounced the Cedarloo point leader Bill Zwanziger of Waterloo in the fifth heat with a 3 minute and 11.29 second performance for the fastest 7-lap time.

The renewal of the duel between Moffit and Jim Houseman of Des Moines, who finished second in the junior championship on Sunday night, ended when Houseman spun on the third lap.

The track was ruled clear and Houseman, as well as others involved in spins, were forced to sit it out with no restarts because the State Fair management had set a 4 pm deadline for the end of the program, which was running 45 minutes late.

It took an hour off the first two elimination heats. The red flag dropped twice for flips, with Chariton’s Jim Irving a victim in the first heat and Joe Marchesano the third heat.

Merlin Benning of Waverly hit the wall coming out of the east turn, with the car catching on fire but Benning escaping with only minor bruises.