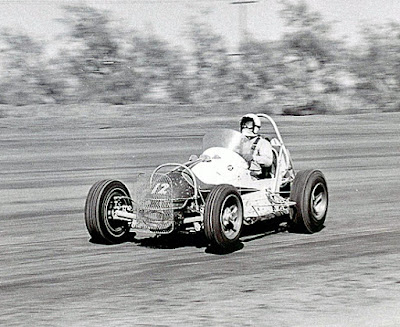 Cleburg, who started on the pole, led every lap to capture $2,000 of the purse, the richest event in Manzanita’s 16-year history.

Dave Lanear of Albuquerque, N.M., was killed in the mishap. Four persons were injured, but their identities were not immediately known.

Several persons had been warned prior to the race not to stand on the portion of the track where the accident occurred but failed to heed officials’ warnings.

McClung was immediately taken from the track in a state of shock.

Finishing second in the contest was Don Nordhorn of Wadesville, Ind., followed by Colby Scroggin of Ruth, Calif.

A crowd of 6,800, the largest in the track’s history, attended the event.

Most drivers conceded that it was the most talented field ever assembled for a non-USAC event.

Cleburg was the only driver who had it easy.

The 40-year-old veteran, a former USAC competitor, simply had the best combination after a wheel-to-wheel duel with Buzz Rose of Des Moines, Iowa, for the first couple of laps.

Then Cleburg lengthened his lead from Rose and the rest of the pack and was never challenged again.

However, nothing was decided for the rest of the positions until the checkered flag waved.

Another non-injurious accident only five laps from the finish saw Dick Fries of Santee, Calif., flip wildly 10 times in the third turn. He walked away but his car was demolished.