1976 – Hansen Outruns the Best at Sunset 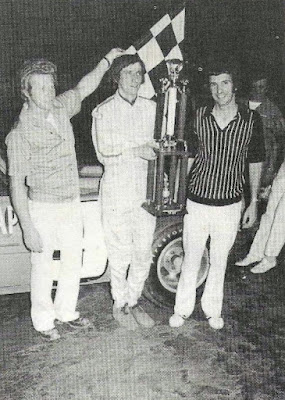 Hansen, in the 100-lap race, took the lead on the 35th circuit when previous race leader Joe Merryfield of Des Moines lost the rear end on his car. Hansen would take over the top spot and lead the last 65 laps unchallenged.

The victory for the 31-year-old, 13-year veteran netted him $1,525 including lap money and a large trophy.

Hansen’s triumph concludes an outstanding victory list for 1976 including the Doc Hunter Classic and Falstaff 100 in Cedar Rapids, Minnesota’s Chateau Invitational, and the Iowa-Minn.-Wis. Challenge in Morristown, Minn.

Finishing some distance behind was Tom Steuding of Altoona, Wis., and Em Fretheim of Decorah, Iowa.

Restoring some of Nebraska’s dignity was a surprise fourth-place finisher, 19-year-old Joe Kosiski of Omaha, turning in his most meaningful performance in his young 21-week racing career. Fifth place fell to George Barton of Ankeny, Iowa.

Don Hoffman of Des Moines, Iowa, who looked impressive in his heat win, took an early lead in the 100-lapper before he exited with mechanical issues only five laps in. Merryfield would inherit the lead and keep it until mechanical problems sidelined him.

A large driver turnout of 88 cars, the best in the Midwest, competed in eight qualifying races for the opportunity to start in the 24-car field.

Ed Sanger of Waterloo, Iowa, a four-track Iowa point champion, was home sick with a lung virus and unable to attend.