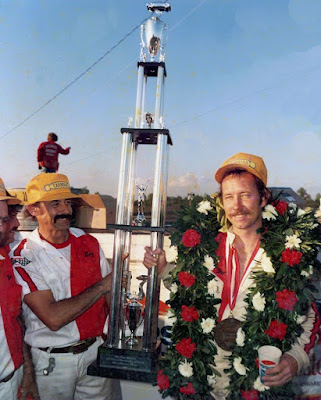 Gary Balough accepts his trophy after winning at Syracuse.

This 29-year-old professional racer from Ft. Lauderdale. Fla.. netted over $12,000 in prize and contingency awards from the record total payoff of over $70,000. Leading 74 of the 100 laps on the well-prepared Geddes oval earned Gary over $1,500 in lap money.

It was also a victory for the big money teams that were drawn to Syracuse by the huge purse and Balough's car, owned by New Jersey contractor, Anthony Ferraiuolo, had an estimated value of over $25,000. This included $13,500 for the Grant King chassis and $7,000 for the exotic timed injection system on the 496 cubic inch Chevy engine.

Bobby Gerhart of Lebanon, Penn., wound up second and picked up $6,000, while “Wily” Will Cagle used an early pit stop to good advantage and took home $4,000 for third. Twenty-year-old Jim Horton Jr. of Bridgewater, N.J., was fourth and Howie Cronce of Phillipsburg, N.J., was fifth.

The start saw polesitter Dick Tobias bring the 53-car field down in good order and the defending champion grabbed the early lead but was knocked out with drive-line problems on the seventh lap.

Balough's neat maroon and white Gremlin-bodied machine then took over, but the yellow was out on the 18th lap, when Wayne Reutimann lost a wheel and flipped in the fourth turn.

Cagle used this caution period to shoot into the pits for his mandatory stop for gas. After 20 laps, two-time Syracuse winner, Buzzie Reutimann had moved from 43rd to 11th, but fifteen circuits later, he lost a wheel and rapped the wall right where his brother Wayne flipped earlier. Liverpool's Peppy Peppicelli dropped out on the 25th lap after running in the top five in the Bev Mead Gremlin.

The final stages of the race saw Gerhart work his way up through the top five and pass Cagle for second with 23 laps left. Nine yellow flag periods for 38 laps kept the field bunched up, but nobody could challenge Balough as he breezed home a quarter lap ahead of Gerhart and Cagle.

The winner, a guaranteed starter from the Nazareth, Penn., Speedway covered the 100-mile distance in 1 hour and 22:44 minutes.

It was his 3rd win in just five starts with his new Ferraiuolo machine, which ran M&H tires.

Twenty-eight of the 53 starters were around at the finish and two protests against the winner were disallowed after final weighing and inspection.