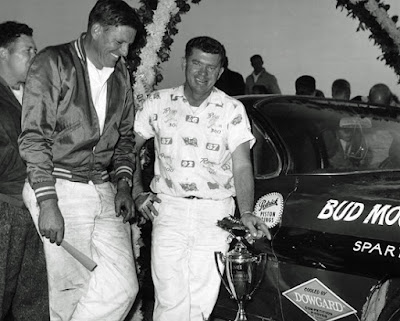 Joe Weatherly is all smiles after winning at Charlotte.

Weatherly, who had been among the leaders in the late stages of the race, forged into the lead after burly Junior Johnson of North Wilkesboro, N.C., who had set a blistering pace to lead from the 200th lap, lost a wheel and wrecked.

Weatherly and the 24-year-old Petty staged a stirring duel that had the 43,000 patrons standing for the final five laps. Petty almost caught the flying Weatherly on the final home stretch turn but couldn’t quite make it.

Weatherly averaged 119.950 miles per hour for the distance and picked up better than $10,000 in first-place prize money.

It was a day of disappointment for one of the pre-race favorites. David Pearson, the 26-year-old Spartanburg, S.C., driver who won the pole position, was in and out of the race several times because of engine trouble.

Petty, driving a 1961 Plymouth, never led the race but stayed up front with the leaders for most of the day. He hung on Weatherly’s bumper for the final laps.