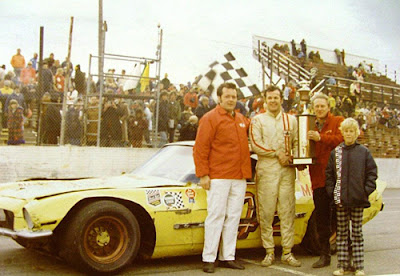 Makara’s payoff, plus money for his 37 leading laps in the championship race, came to over $1,000. The NASCAR Canadian point champion from Ancaster, Ont., won both his races by less than three laps over track veteran Jim Back of Vesper.

Makara changed rear tires between races which helped in the championship race, he said. Makara took the lead on the 13th lap of the championship battle as he went to the outside on the back straight to overhaul early leader Dave Watson.

Makara increased his lead to nearly a quarter-lap by the 37th circuit before a spinout by one of the middle-of-the-pack drivers brought out the yellow caution flag and bunched up the field, leaving Back in good position on Makara’s rear bumper.

But Back was unable to catch the speedy 1973 Camaro, which won by two car lengths. Marv Marzofka of Nekoosa, last year’s Oktoberfest winner, finished third, less than a length behind Back. Johnny Reimer was fourth followed by Rich Somers.

In an earlier 50-lapper, Makara took over first place from Jim Sauter on the 17th lap and built a healthy lead before Back came on strong in the late stages to finish just three car lengths away. Marzofka was third in that one also. Sauter was fourth and Watson fifth.

“I was taking it easy for about the last 20 laps,” said Makara, who was hoping his tires would last the race. “I didn't see Back coming up on me until about the last lap.”

Buck Linhart of Wonewoc won the 20-lap consolation race after taking the lead on lap 11. Steve Holzhausen of West Salem came in third.

Nearly 2,900 fans braved the cold, windy weather to watch the season’s final race, which had 70 entries.