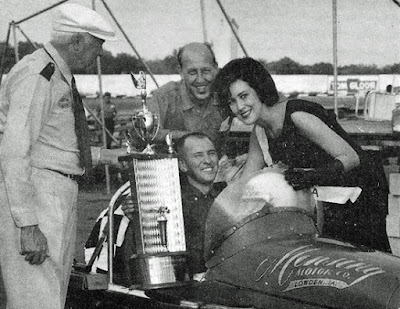 Birmingham, Ala. (October 5, 1963) – Thirteen was an unlucky number for an Indianapolis pilot who piled into the guardrail at the Alabama State Fairgrounds racetrack on Saturday afternoon.

Bill Hunter, one of 13 drivers in the feature event, slammed into two other cars before ramming his Studebaker-powered midget head on into the guardrail.

His left leg pinned between the motor and frame; Hunter was wedged in the car for about 15 minute before he was rushed to an area hospital.

Ritchie beat Willard Yates, also of Cedar Rapids, in a nip and tuck contest which saw only two cars eliminated.

Winning the feature event stacked up a total of 1,460 points for Ritchie, shoving him ahead of Howard House of Kanas City, Mo., who tallied 1,226 points toward the championship title. House crossed the finish line in fourth.

The two-man battle between Ritchie and House is the closest championship race in the history of IMCA racing.

The spectacular crash which took Hunter out of the race occurred early in the feature when Jim McVay of Wichita, Kan., skidded out of control on the south turn and slammed into Danny Frye of St. Louis, Mo.