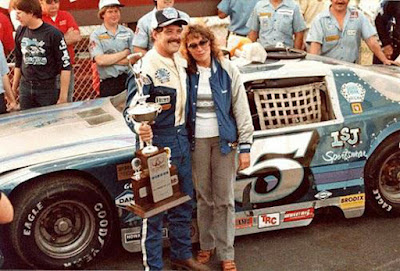 Wisconsin's Jim Sauter in victory lane after his win in the 3rd annual All-American 400 at Nashville. - Steve Zimmerman Collection

Nashville, Tenn. (October 30, 1983) – Jim Sauter pulled ahead of Dick Trickle only five laps from the finish and went on to win the All-American 400 stock car race at Nashville International Raceway.

Sauter, a Necedah, Wis., resident, who finished four car lengths ahead of Trickle, pocketed $12,000 for his record-breaking effort in this third annual fall event which brings together the top short track drivers from the North and South.

The event is billed as the “Civil War on Wheels,” since the 239.4-mile race is run jointly by Southern-based ALL PRO Racing Series and Northern-based American Speed Association. The Yankees, however, have dominated the race in previous years and continued the streak on Sunday afternoon.

Sauter and hiss Yankee counterparts took 10 of the top 15 spots, including four of the first five positions. Following Trickle, the Wisconsin Rapids, Wis., driver who sat on the outside of the front row, were defending champion Bob Senneker of Dorr, Mich., Gary Balough of Fort Lauderdale, Fla., and Butch Miller of Lawton, Mich.

“Super” was the word for the day for Sauter, a 40-year-old father of 11 who was a popular winner with the estimated 14,000 in attendance.

“The crew did a super job. The car ran super well in the low groove. It was super to beat Dick, he’s a super competitor,” said Sauter, whose winning speed of 82.343 miles per hour bettered the race record of 75.336 m.p.h. set by Butch Lindley in 1981.

Sauter, who continually challenged Trickle for the lead for most of the final 50 laps, got a break after he slipped by Trickle in turn two to take the lead. When the pair came up on a slower car driven by Jody Ridley, Ridley pulled down to the track’s apron to allow the leaders to pass and Sauter maintained his slight lead.

Then, Larry Raines spun out in the first turn, bringing out a caution with four laps to go.

Race rules require the final five laps to be run under a green flag. So, on the restart following three unscored laps, Sauter managed to pull out to a reasonably comfortable 8-10 car length advantage for most of the final four trips around the .596-mile oval.

Polesitter Rusty Wallace of St. Louis, Mo., led the first 58 laps but fell from contention when he was forced to pit under green with a flat left rear tire. That misfortune was followed by a broken stud on the same wheel and a slight head-on collision with the pit wall.

The day wasn’t a total loss for the 27-year-old Wallace. He managed to finish 11th, good enough for a 26-point advantage to clinch the 1983 American Speed Association national points championship.