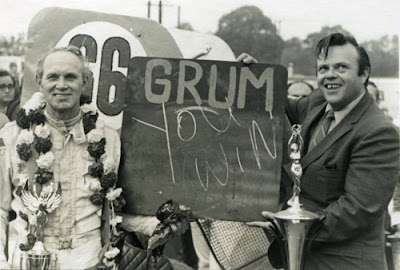 Mechanicsburg, Penn. (October 25, 1970) – Johnny Grum, of Altoona, Penn., had himself a record shattering weekend at the Williams Grove Speedway.

The popular veteran won the 8th annual National Open and did it in record setting time. The record in the 150-lap event was completed in 65 minutes and 7 seconds.

It was the third record Grum had set at the Grove in two days. On Saturday Grum set a new one lap standard posting a time of 23:035 seconds. He was clocked in 32:53 in the second 75-lap leg of Sunday's feature which is also a record.

It was not an easy victory for Grum. During the first 75-lap segment of the 150-lap event, Grum had to sit back and watch Bobbie Adamson, of Wrightsville, Penn., lead all the way.

Adamson, who started second, took the lead moving into the first turn of the first lap and was never headed. However, Grum stayed close and never dropped back further than second.

During the mandatory pit stop, car owner and chief mechanic Harry Fletcher made several changes which proved the difference in the event. Fletcher decided to go to a higher gear and put a larger tire on the left rear.

It took Grum three laps to catch Adamson as the second 75 lap even started. But on the 79th lap, moving off the second turn, Grum charged into the lead.

On the following lap, Bobby Allen, McSherrytown, Penn., worked his way past Adamson, and started chasing Grum. From this point until the 120th lap Grum, the veteran, and Allen, the young charger, put on a real donnybrook.

However, when the two drivers moved into the heavy lapped traffic, Grum began opening up distance between himself and Allen. At one point he had a good five-second advantage over Allen.

When Grum took the checkered flag, he had a 3.5 second lead over Allen. Kenny

Weld, of York, who lost a header pipe on the 72nd lap, hung in and finished third. Steve Unger, Garrettsville, Ohio, turned In an impressive ride and finished fourth and Adamson hung on to collect fifth place.