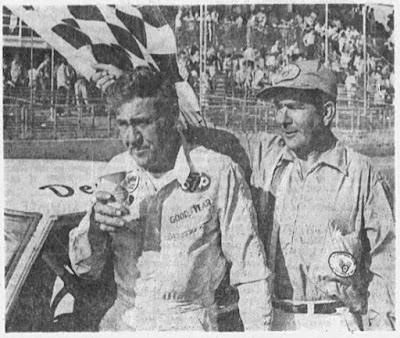 He breezed to victory Sunday afternoon before a crowd of better than 5,000 at State Fair Speedway as he took the checkered flag in the 100-lap IMCA late model stock car race.

Derr took advantage of trouble encountered by rival Ramo Stott. Stott left the pack after 33 laps when his 1968 Plymouth dropped its lower control arm pin in the track creating steering difficulties. As a result, Stott finished 15th and losing expensive points in the battle with Derr for the ’68 championship.

Derr commented after the race that the condition of the track was the roughest he had found in recent years. State Fair officials had used the track for parking Saturday night for a football game. This prevented officials from grading the surface an applying calcium on the dirt.

“I had no problems winning this one, it was a wonderful race,” Derr mentioned afterwards. “My car ran fine and smooth.”

Derr jumped into the lead trailed by Stott and Baton Rouge’s Freddy Fryar. Stott was hot on Derr’s tailpipe on lap 16.

Fryar pulled into the pits on the backstretch on lap 19 after dropping a cylinder.