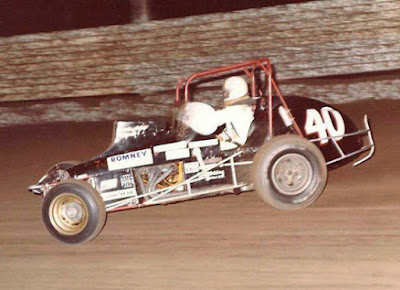 But there was nothing weird about the way he drove it to his second Western World Sprint Car Championship at Manzanita Speedway before a standing room only crowd on Saturday night.

In only the second time he’s ever driven the car, Shuman led the entire 50 laps but had all he could handle with pursuer Lealand McSpadden, then three-time California Racing Association champion Jimmy Oskie of Cerritos, Calif.

Shuman’s victory made his only the second two-time Western winner and knotted the Western scoreboard at five wins apiece between out of state and local drivers.

The victor was worth approximately $8,500 and that may have been more money than Shuman has made all year on the tough United States Auto Club sprint car circuit.

From the beginning, it appeared that the race would boil down to a Mesa vs. Tempe shootout. McSpadden put his Gary Stanton Chevy into the runner-up spot from the outset and it was like a black shadow to Shuman’s car.

Memphis flash Sammy Swindell worked his way into the third spot, but he was the first of the favorites to drop out after only 19 laps.

Then, on the 32nd lap, a tell-tale smoke began billowing out of McSpadden’s machine, signally an end to his efforts after 33 circuits.

At one point, Oskie actually dove underneath Shuman on the inside of turn two. But the racetrack had long become hard and slick and there was no traction then. Shuman stayed in the customary high groove and stayed there until the finish.

There was no cushion to run on, but Shuman knew what to do from running so many previous laps on his home turf.

At the finish it was Shuman, Oskie, Ferkel of Findlay, Ohio, Bobby Allen of Hanover, Penn., and Smokey Snellbaker of Dover, Penn.

The race had to be red-flagged for one lap when Tom Corbin of Carrollton, Mo., took out about 20 feet of the turn two wall. Unbelievably, Corbin was able to return to his race car and continue to compete.