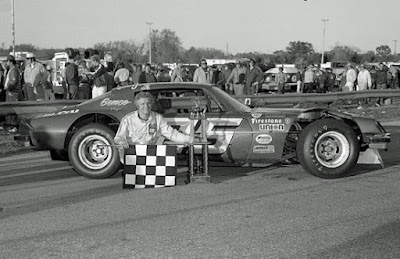 West Salem, Wis. (October 4, 1977) – Larry Detjens of Wausau captured a big weekend of racing at the La Crosse Interstate Fairgrounds on Sunday by winning the 100-lap late model feature which was part of the eighth annual Oktoberfest.

The feature win coupled with his preliminary performances enabled Detjens to take home $1,945 of the event’s total purse of $19,193.

It was Detjen’s second straight Oktoberfest victory, making him the second two-time winner in the event’s history. Tom Reffner took the 1970 and 1975 titles.

The 100-lap main event on the 5/8-mile asphalt oval featured the top-10 finishers from each of the two 50-lap features held earlier in the day. The field was rounded out by the remaining 11 fastest qualifiers.

Polesitter Rich Somers of Stevens Point jumped out to the early lead. He held until lap 7 when Don James of Bloomington, Minn., spun and hit the wall in turn three.

Somers and his 1972 Mach I continued to lead until lap 19 when Mike Miller of Wisconsin Rapids edged ahead. At the same time Detjens took the number two spot away from Somers. Somers dropped one more spot a lap later as Jim Sauter of Necedah, who had started 21st, took third.

Sauter continued his drive towards the top when he powered past Detjens on lap 32 and then set out to catch Miller. Sauter moved to the outside of Miller on lap 33, but as he was making his bid a cut tire sent Sauter spinning into the wall, ending his bid for the title.

When the green flag returned, Detjens moved up to challenge Miller for the lead. Detjens got by Miller’s 1970 Mustang on lap 37, one lap before Dick Trickle blew a tire and backed into the first turn wall bringing out the caution flag.

With Detjens pacing the field, Steve Burgess of Fall Creek moved up on Miller. On lap 54, Burgess took the number two spot and set his sights on Detjens.

Lap 70 saw the third caution of the race when Larry Nipple spun in turn four, allowing Burgess to close in on Detjens.

After the restart, Detjens slowly began to pull away. But his efforts were negated when the yellow waved moments later when Bruce Sparrman blew a tire and scraped the first turn wall.

Again, Burgess pulled in right behind Detjens as the race was green-flagged and the two battled on virtually even terms throughout the final 11 circuits. Detjens, with more power, would pull away on the straightaways, only to have Burgess close the gap in the turns by using the inside groove.

On the final lap the two were even coming out of turn two, but as they raced down the backstretch Detjens pulled to a half-car-length lead.

As the two rounded the fourth turn and headed for the finish line, Detjens maintained his half-car-length lead and won by four feet at the checkered.

Following Detjens and Burgess were Miller, John Ziegler of Madison, and Marv Marzofka of Nekoosa.
Results –