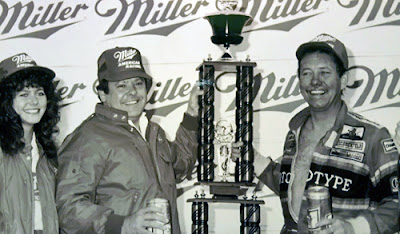 Gary Balough in victory lane after winning the All-American 400 in Nashville.

While Waltrip was winning the Holly Farms 400 in North Wilkesboro, N.C., Balough used a tip from Waltrip to get his Nashville Raceway victory and a $15,515 paycheck to go along with it.

“Darrell drives this track better than anyone, and he told me to keep the car down in the low groove, go into the corners easy, and come out hard. I came here this week with that in mind, and that, more than anything, was the biggest factor in winning today,” Balough said afterwards.

Balough sat on the pole position with a race record 112 miles per hour qualifying lap and his Chevrolet Camaro was the dominate car in the crowded 40-car field. The Fort Lauderdale, Fla., pilot led 301 of the 400 laps. Nearly one-third of the race – 90 laps - was run under the 12 caution flags.

Those five drivers were the only ones on the lead lap when the checkers flew.

Ridley took the lead from Balough on the 22nd lap and led until lap 106. Ridley also led lap 193, under caution, before yielding to defending champion Jim Sauter.

Sauter, who finished 16th after dropping out with a burnt piston, kept the lead for 14 circuits, but only four of those were under green. Balough turned over the lead to Alexander when he pitted on lap 307 but was back in front on lap 308 and was never seriously challenged.

Sunday’s race was billed as the “Civil War on Wheels,” since it featured drivers from the Northern-based American Speed Association and the Southern-headquartered ALL-PRO Racing Series. The South was the winner of the North-South battle, taking three of the top four positions and six of the top-10.