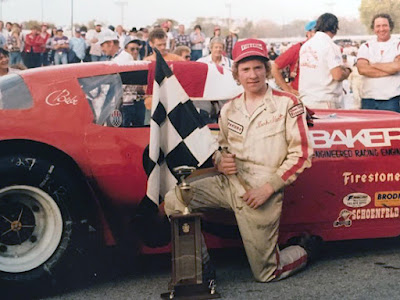 Mark Martin proudly shows off his trophy after winning the Buckeye 400.

Martin was running second behind Anderson when he decided to pit during a caution for right-side tires with a softer compound with only 29 laps left. His crew changed the tires in 21 seconds, allowing Martin to get back on the track just five seconds behind Anderson.

Martin steadily closed the gap between himself and the leader, then put his Camaro out in front on lap 290 to stay. He finished 1.5 seconds ahead of Anderson at the finish line.

“We had the tires mounted. We thought they would be good 50-lap tires,” Martin said of his crucial decision to pit so late in the race. “The time was right to come in.”

With the victory, 19-year-old hot shoe clinched the 1978 American Speed Association championship. He is the youngest driver in the sport’s modern history to clinch a major season title.

The event capped a 20-race season for the ASA, which is contested tracks in eight midwestern and southern states.

Anderson, who started 29th in the 30-car field, charged into the lead for the first time on lap 80 and stayed in contention the rest of the way. But a caution period prompted by Tom Harrington’s spinout on lap 266 allowed Martin to make the key pit stop.

The average speed of the race was 84.18 miles per hour, a new record for the half-mile paved oval.