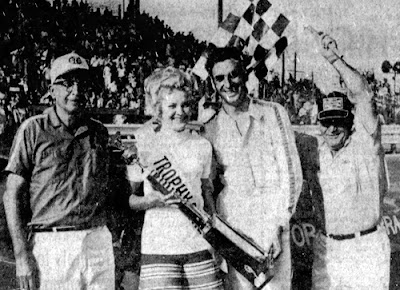 Shreveport, La. (October 24, 1971) – Winning auto races is a habit that runs in the Hutcherson family of Keokuk, Iowa. Dick Hutcherson made headlines as a former IMCA national champion before moving to the high banks of the NASCAR circuit.

The latest member of the family to do the chauffeuring on the track is 28-year-old Ron Hutcherson. In 1964, Ron made his auto racing debut on the Louisiana State Fair track driving one of Dick’s cars.

He was one of three drivers to hold the lead in the marathon. Sam Simpson of New Orleans took the early pace in a 1966 Chevelle but David Goldsberry of Springfield, Mo., put his 1970 Chevrolet to the front on lap 11. Hutcherson overtook the Missouri driver on lap 88 after a side-by-side duel for 10 laps.

Hutcherson is in his second full season of IMCA competition and his ranked second in the point standings, the same position he held last year.

“I like dirt tracks best, but the asphalt is here was fine. My crew headed by my father had the car operating fine,” said Hutcherson. “My strategy was just to finish and to drive as fast as possible.”

Hutcherson, who spends the off-season as an operator of a paint business, said he pushed to the front when some of the other drivers seemed to lessen their speed. It was his fourth feature win of the year. His biggest win of the year was when he took a 500-lap race at the Minnesota State Fair with a record time.

“My car runs about a 1,000 pounds heavier than some of the cars entered today,” Hutcherson remarked.

A capacity crowd was attracted by the race. “This is the finest field I have ever presented,” stated promoter Bud Carson of Mar/Car Promotions out of Oklahoma City. Forty-eight cars entered the program.