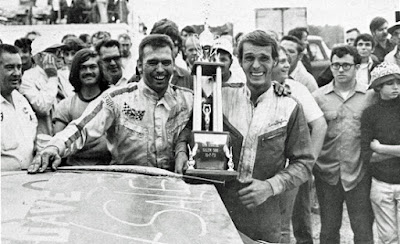 Two tired but happy drivers at Salem after 500 grueling laps, Dave Dayton (right) and Bruce Gould, who took over for Dayton and won the race.

Salem, Ind. (October 7, 1973) – Bruce Gould of Cincinnati, driving in relief of Dave Dayton, survived a complete spin on the last lap and went on to win the Automobile Racing Club of America’s Salem 500 stock car race before 4,012 fans at Salem Speedway.

Dayton, from Indianapolis, started the pole position and dueled Watson and Gould for the lead in the early going in what was the opening race for the 1974 ARCA season.

However, after his own car was involved in an accident that also involved Iggy Katona, Wayne Trinkle and Jerry Norris, Gould relieved Dayton about midway through the 250-mile event and went on to score his second 1973 triumph at Salem.

Jim Robinson of New Albany, Ind., finished third in a ’73 Camaro while Wayne Watercutter was fourth in a ’72 Camaro.

Robinson, who had taken over in relief of Larry Clemons, also of New Albany, early in the race, survived a wild melee that sidelined Jesse Baird, Jack Shanklin, Jeff Faber, Tommy Spaugh, and N.D. Copley.

Indianapolis 500 veteran Jim Hurtubise managed to work his way to sixth place before an axle broke on his car he was driving, a Chevrolet owned by Bill Kimmel of Clarksville, Ind. Once repairs were made, Kimmel took over the driving chores and limped to a 10th place finish after experiencing tire trouble.