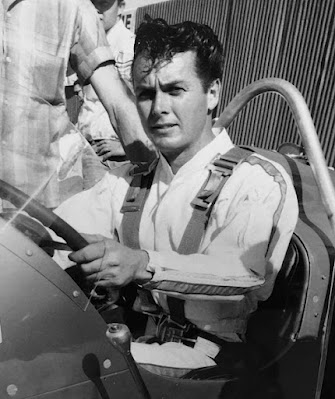 Atkins, 28, a rookie in the. USAC ranks, drove A. J. Agajanian's Offenhauser -powered sprint car to the $8,000 victory before 13,800 fans at the one-mile California State Fairgrounds dirt oval.
Atkins started racing in 1960 at the Oakland Exposition Building indoor midget shows, won the BCRA championships in 1964 and 1965, and the indoor midget title last year.

With qualifying time trials nearly over, Atkins held the fastest time at 37.49 seconds when veteran Don Branson of Champaign, Ill., the fastest qualifier and winner of the 1965 Golden State 100, hung the Leader-Card Offy right on the dirt bank to take over the pole position with a 37.48 second lap.

With the 1965 USAC national champion Mario Andretti sitting in the second row, Atkins dove into the lead on the first lap, but Branson moved ahead on the second lap with A. J. Foyt, a three-time winner at Sacramento, moving up from the rear into fifth spot.

By the 23rd lap, Andretti moved into second place behind Branson followed by Atkins, Fresno's George Snider, and Foyt - but then Foyt's fuel pump worked loose and the former Indy winner was out of the race.

With 74 laps gone, Snider, with the same driving style as Andretti, appeared unable to pass the leader as the rough circuit began to take its toll on tires.

Arnie Knepper of Belleville, Ill., spun on the 85th lap letting the 12 remaining cars from the 18 starters bunch up again under USAC yellow flag rules. Branson went out to change tires and the order stood at Andretti, Atkins, Snider, Hulse, and Dickson.

Then on the 95th of the 100 lap race, leader Andretti suddenly slowed. Atkins went to the portside to pass, and Snider hit Andretti's rear wheel and spun off at turn four.

As Andretti, the leader for 63 circuits, pushed his car back to the pits, Atkins took the checkered flag for the 88.5 mile per hour average win with the yellow flag still waving.

Atkins, obviously tired after the race, said his tire was completely worn out from loss of the shock absorber and probably wouldn't have finished the last five laps if they had been at full racing speed.

The victory was Atkins' first since joining Parnelli Jones on Agajanian's team this year. His best finish until Sunday was a second at Du Quoin. Last year Atkins, in his first year at Sacramento, finished 12th spinning on the 99th lap.