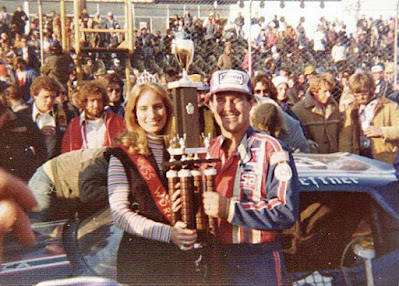 Tom Reffner accepts his trophy after winning the World Cup 400 at I-70 Speedway.

Reffner had given a hint of what was to happen when he set a new one-lap track record on Friday night of 17.414 seconds. That performance put him on the pole, and once in front, he was there more often than not.

There were several yellow flags and several other leaders before Reffner took over for good. Among the interim frontrunners were Dave Watson and Joe Shear, both of Beloit, Wis., Bob Senneker of Dorr, Mich., and Larry Detjens of Wausau, Wis.

Watson went on to finish second ahead of Senneker.

“I thought I had it won,” Watson, who only a couple of weeks before had won the National Short Track Championships at the quarter-mile Rockford, Ill., track. “Then the (engine) temperature went up and I went slower.”

After Senneker came Larry Phillips of Springfield, Mo., and Mike Eddy of Midland, Mich., to round out the top five.

Reffner dueled Senneker and Shear for more than three-fourths of the race.

The famed Buck Baker of Charlotte, N.C., was the top finishing NASCAR driver at ninth-place. The top USAC driver as Dean Roper of Springfield, Mo., who finished 21st.

Reffner, who last year won 67 feature races, said that, until this event, the most money he had ever won for one race was about $3,500.