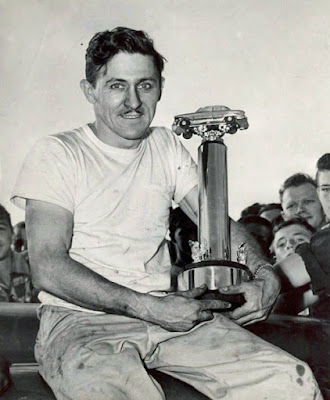 Shreveport, La. (October 26, 1958) – A crowd of more than 4,000 thrilled stock car patrons witnessed one of the most exciting races promoted on the Louisiana State Fairgrounds’ half-mile Sunday night as Ernie Derr of Keokuk, Iowa, withstood torrid competition by 14 other drivers to win the 198-lap feature that concluded the 1958 International Motor Contest Association season.

Derr’s victory was anything but easy and it wasn’t without its abundance of excitement, and a spectacular finish created when a blowout on a rear tire on Johnny Beauchamp’s car caused the 1956-57 IMCA national champion to spin directly in front of the grandstand and also in the path of current IMCA point’s leader Don White.

White crashed broadside into Beauchamp’s machine, sending it rolling and touching off a fire underneath the car.

Beauchamp, of Harlan, Iowa, managed to escape from the car and jump over the fence into the grandstand free of injury although his car was totally demolished. Despite a smashed front end, White was able to continue and finished second.

IMCA officials stopped the contest at lap 198 because of the oil slick on the track from Beauchamp’s wrecked car.

Derr, who hadn’t finished worse than third since July, took the lead on lap 141 when White’s car suffered a flat tire.

Herb Shannon was the early leader and set the pace until he was passed by White on lap 28. White would extend his lead and for the next 113 circuits, everything was going smooth for the Keokuk, Iowa, driver until his blowout.

The sensational finish crowned Don White the 1958 national champion, largely on points amassed during the season prior to the Louisiana State Fair.

Derr finished the season number two in points behind White with Beauchamp finishing third. Bob Burdick of Omaha, Neb., who was third in points coming into the races in Shreveport, left the State Fair on Saturday to begin his trek homeward, where he will enter the service next week.