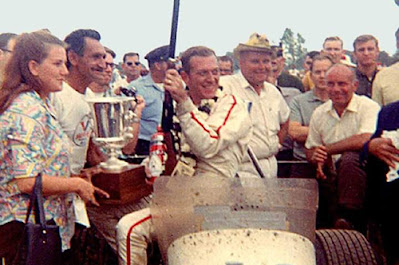 Gary Bettenhausen celebrates after his victory at Terre Haute.

Terre Haute, Ind. (October 19, 1969) - Other drivers on the United States Auto Club sprint car circuit must think Gary Bettenhausen owns the Action track. And a piece of the pearly gates.

With two laps to go in the Don Branson Classic yesterday, the second-generation racer from Tinley Park, III., was trailing another member of a famous racing family, Johnny Parsons Jr., when the latter spun out on the fourth turn and allowed Bettenhausen to speed to the checkered flag.

The victory was his fourth in the last five outings for the sprint cars at the Action Track, and all but gave Bettenhausen the national sprint car title.

An extremely slick track plagued drivers throughout qualification and heat races, but the feature was a different matters as the yellow flag was never needed.

Parsons led the first three laps of the feature but was passed by Bill Puterbaugh on the fourth lap. Puterbaugh built a commanding lead, but engine trouble forced him to relinquish his lead and watch the remainder of the race from the pits.

From lap 15 when Puterbaugh was forced out, Parsons held the lead. At this time, Bettenhausen was in third, but passed second-place Lee Kunzman on lap 26 and eventually took the top spot.

The fast qualifier for the day was Lee Kunzman with a time of 23.93. Charlie Masters was second, Rollie Beale took third, and Bill Puterbaugh fourth, in the qualification attempts.

Kunzman also captured a victory in the first heat, leading the entire 8-lap contest. Puterbaugh placed second in this event.

The second heat race saw fifth fastest qualifier Karl Busson charge to victory. Sam Sessions, who would place third in the feature, grabbed a second-place finish in this heat.

Heat number three was a victory for Larry Dickson. Bettenhausen, however, provided the excitement in this race, moving through the field from his tenth starting spot to finish third.