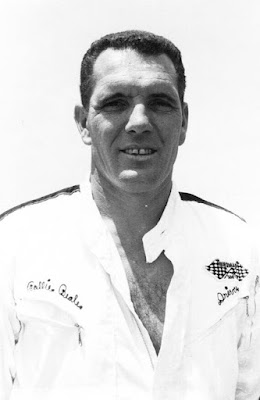 It was a good day for new drivers who have come over to USAC from other circuits.

Beale, who won on April 7 at Eldora, took the lead on the first lap and set the pace the entire distance to the checkered flag.

Bruce Walkup, who had fast time on the day at 18.05 seconds on the half-mile paved track, finished second in the Smith Speed Shop #50 followed by Jerry Daniels in the Wagner Chevy, Karl Busson in the Cedoz Chevy and Sonny Ates in the Dickson Chevy. There was no time in the event due to a first lap tangle.

Walkup and Beale raced wheel to wheel into the first set of turns at the start and Beale pulled away as they dashed down the back chute. Not to be denied, Walkup stayed with the leader for the first 20 laps until they encountered slower cars. At the finish there was a three-second margin.

As the leaders roared through the first turn, there was a lot of bumping in the back of the pack and Chuck Engel got up on the guard rail, straddled the rail before coming back down on all four wheels. Sam Sessions, attempting to avoid the melee, dove down and slid into the infield dirt.

Daniels, while leading the second heat, blew a radiator hose. Sliding in his own water, he bumped the guard rail. He then proceeded to the pit area where his crew installed a new hose and he came back out to win the 8-lapper.